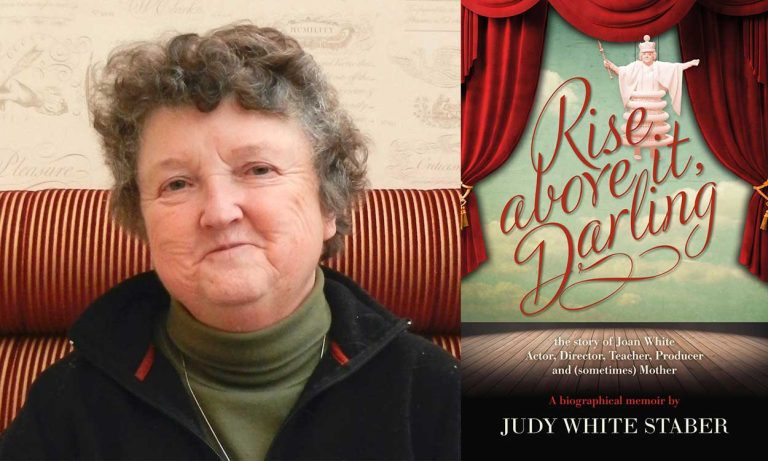 This 1:30 event is sold out, but there are plenty of spots available for the 3:30 session.

Celebrate the publication of a biographical-memoir by our former executive director, Judy White Staber. “Rise About It, Darling: The Story of Joan White” Actor, Director, Teacher, Producer and (Sometimes) Mother (The Troy Book Makers, January 2022), is about Staber’s mother, who was a well-known actress and teacher in the 20th century theatre world. The event will feature a reading and Q&A, followed by a reception where copies of the book will be available for purchase (cash or check only please).

“I’m delighted to launch my new book at the Academy,” says Staber. “I served as the organization’s executive director, along with Susan Davies, from 1996 to 2004. This event feels like a homecoming and I look forward to seeing old friends and meeting new ones there.”

An alum of the Royal Academy of the Dramatic Arts and discovered early on by George Bernard Shaw, Joan White was a fixture of the English-speaking theatre for over six decades. In RISE ABOVE IT, DARLING, her youngest daughter, candidly reveals that, though she was an international success, White was also a single mother who set aside her own two children for her career. Staber examines her mother’s fascinating life on stage and off, three decades of which were spent in the United States and Canada, while also interweaving her own story.

Judy White Staber was born in England to a theatrical family and moved to New York City in 1959. After a short career in the theatre as an actor and stage manager, she married and became a mother. While raising her children in the Berkshire Hills of Massachusetts, she worked promoting the performing and visual arts. Judy has written, acted and produced fifteen original Pantomimes in the U.S. and also scripted and co-produced two children’s TV shows for Public Television winning several Awards. In 2010, she published her memoir, SILVERLANDS Growing Up at the Actors Orphanage.