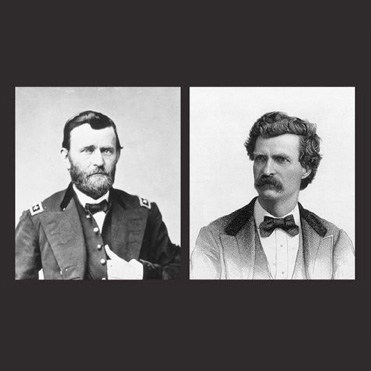 At age 62, Ulysses Grant is bankrupted in a Wall Street swindle. His only hope to restore his honor and save his family is an offer to write his memoirs of the war.

“I think the most interesting personality I ever encountered was General Grant. How and where he was so much larger than other men I had ever met I cannot describe.”
– Mark Twain (Samuel Clemens)

GRANT & TWAIN tells the story of a remarkable friendship. At age 62, Ulysses Grant is bankrupted in a Wall Street swindle. His only hope to restore his honor and save his family is an offer to write his memoirs of the war. News of Grant’s calamity brings his friend Mark Twain to his side. Twain is infuriated by the terms offered by the prestigious publisher. He makes an audacious proposal: he himself will publish Grant’s book and make it the biggest bestseller in American history. When Grant finally agrees, he is faced with a double enemy — he is diagnosed with terminal cancer and writes in a race with death; and he discovers an enemy close to home.

Elizabeth Diggs has been a resident of Austerlitz for more than thirty years. Her plays, including “Close Ties”, “Goodbye Freddy” and “Nightingale”, have been produced at theatres nationwide, in England and Europe. She is the recipient of Guggenheim and NEA grants in playwriting as well as the Los Angeles Drama-Logue Award, the CBS/FDG Prize, and a Kennedy Center Fund for New American Plays grant. She was a runner-up and a finalist twice for the prestigious Susan Smith Blackburn Prize. She also wrote for the groundbreaking TV drama St. Elsewhere. She is Associate Professor of Dramatic Writing at Tisch School of the Arts, NYU.

The rise and fall of Grant’s reputation is one of the things that fascinated Liz. At the time of his death, he was revered, linked to Lincoln and Washington as our three greatest leaders. His funeral was ten times the size of Lincoln’s. But his reputation went steadily down for the next century. In recent years, his life and accomplishments have been on the rise again. Two recent biographies by Ronald C. White and H.W. Brands are both positive. Liz says she agrees with Eisenhower, who said, “He met every test and rose to the occasion unlike any other man in American history. He’s not been given his due.”