Following the Ninth: In the Footsteps of Beethoven’s Final Symphony 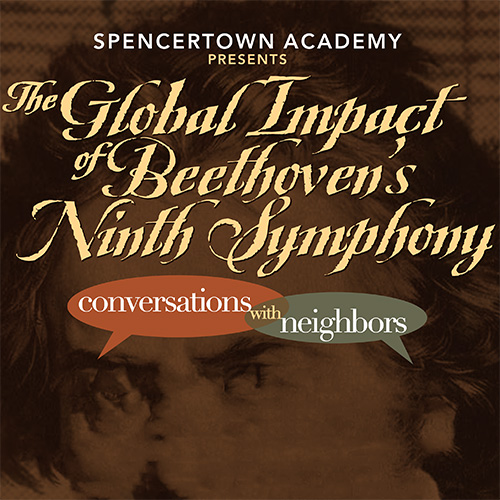 As part of our Conversations with Neighbors series, this special screening will feature a Q & A with co-producer Greg Mitchell, and a Beethoven Sonata performed by Lincoln Mayorga. Purchase tickets now.
The Ninth Symphony was composed in 1824, by a man with little to be thankful for. Beethoven was sick, alienated, and deaf, had never managed to find love, nor create the family he wanted. Yet, he created an anthem of joy that embraces the transcendence of beauty over suffering.

Celebrated to this day for its ability to heal, repair, and bring people together across great divides, the Ninth has become an anthem of liberation and hope that has inspired many around the world:
• At Tiananmen Square in 1989, students played the Ninth over loudspeakers as the army came in to crush their struggle for freedom.
• In Chile, women living under the Pinochet dictatorship sang the Ninth at torture prisons, where men inside took hope when they heard their voices.
• As the Berlin Wall came down in December 1989, it collapsed to the sound of Leonard Bernstein conducting Beethoven’s Ninth as an “Ode To Freedom.”
• In Japan each December, the Ninth is performed hundreds of times, often with 10,000 people in the chorus. Following the Ninth gives us insight into the heightened importance of this massive communal Ninth, known as “Daiku,” in the aftermath of the earthquake and tsunami of 2011.