Conversations with Neighbors: Michael Singer in Conversation with Sam Pratt 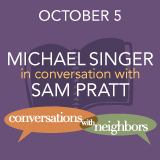 Sam Pratt is a writer, designer and environmental activist who led the nearly seven-year fight against St. Lawrence Cement. He’s written for some two dozen national publications, most recently The New York Observer. He covers local matters for Rural Intelligence and at his own site, www.sampratt.com .
Michael Singer was News Director at KCBS Los Angeles, where he won a Peabody Award for investigative reporting. He was a CBS Network News Producer and he made documentaries for NBC and MSNBC. He was a freelance journalist, published in New York Magazine and The Village Voice, among others. He worked as an analyst for Medley Global Advisors, a private financial and political research company. Retired, he is now finishing a novel. Click to purchase tickets.