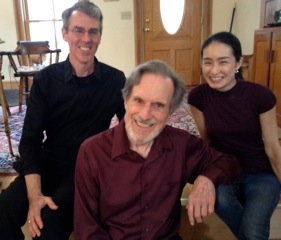 Among the frontiers that women have yet to occupy is their universal acceptance as worthy classical composers. At its next concert on Sunday, November 2nd, 2 pm, at the Spencertown Academy (Spencertown, New York), Bend the Knotted Oak (BKO) Chamber Music will make its case for female composers.
Artistic director and pianist Uel Wade will be joined by violinist Mitsuko Suzuki and cellist Robert Reed in presenting works by Cécile Chaminade, Amy Beach, Barbara Heller, Grazyna Bacewicz, Elisanda Fábregas, Augusta Read Thomas, and Judith Lang Zaimont.

The oldest and largest works on the program are the trios by Chaminade and Beach. Chaminade is known mostly for her small character pieces for piano and her salon songs, which has led music critics to dismiss her music as lightweight. But the Trio is a muscular work that can hold its own with those of “the big boys” of the Romantic era.

Beach is also known mostly for her songs. One of her last compositions, the Trio reaches back for inspiration to her earlier works: a dramatic art song; settings of two Inuit folk songs; and a piano piece in the style of Debussy, which is treated à la Brahms.

Bacewicz, a Polish composer who gave secret underground violin and piano concerts during World War II, is represented here by Polish dances for violin and piano. (Poland issued a stamp with her portrait on the centenary of her birth.)

The German Heller, a founder of the international group “Women in Music,” has devoted much time and energy to promoting previously neglected works by female composers. Wade and Reed will play a 1989 duo, based on a protest song, that honors 50 Iranian women who were murdered under the Chomeini regime.

Fábregas is represented by Spanish-flavored pieces for cello and piano, written in 2006, influenced by the pungent sound of the guitar. She grew up under the Franco regime, which officially declared “The role of a woman is to serve.” She rebelled, fled, and succeeded.

Thomas composed a moving violin solo, in the spirit of Bach, for Cathryn Tait, a friend who was dying of cancer. Tait premiered the piece just before her death, in 1995. Zaimont is editor-in-chief of “The Musical Woman” book series. Her Serenade for trio, written in 2008, is surprisingly melodic and tonal for such a recent work; above all, it beautifully moves the heart.