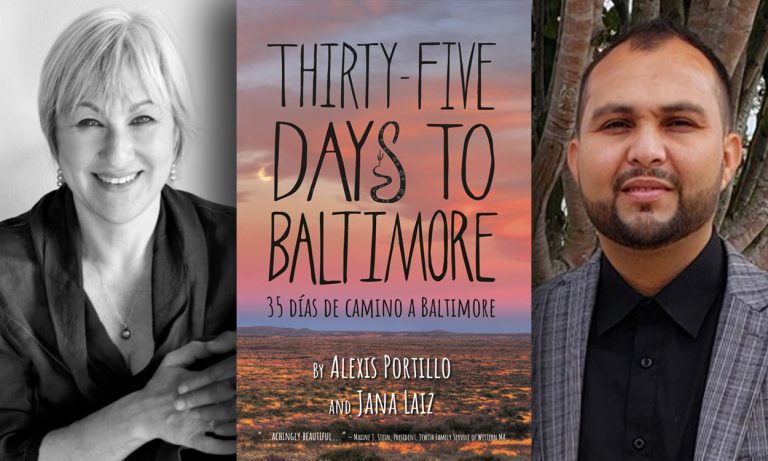 Online ticket sales have closed.  Tickets will be available at the  door.

The Spencertown Academy in collaboration with The Chatham Bookstore presents Jana Laiz and Alex Portillo for a reading and discussion of their new book, Thirty-Five Days To Baltimore.

In 2004, seventeen-year-old Alexis Portillo embarked on a harrowing journey from Honduras to Baltimore in the hopes of starting a better life. Over a decade later, Alex recounts his story to author and activist, Jana Laiz in this bilingual retelling. This book will give readers insight into the incredible power the American dream holds for those suffering the hopelessness and violence of extreme poverty. This is a modern day odyssey of what one immigrant faces as he makes the treacherous journey out of unfathomable living conditions.

Tickets are $10, proceeds will be donated to the Berkshire Immigrant Center.

Books will be for sale and the authors will be available for signing after the conversation.
Ticket holders will receive 10% off books purchased at the event.

Jana Laiz, is a writer and educator living in the Berkshires of Western Massachusetts. She is the author of the award-winning novels Weeping Under This Same Moon (in development for film), The Twelfth Stone, and Billy Budd in the Breadbox: The Story of Herman Melville & Eleanor. She is the co-author of A Free Woman On God’s Earth: The Story of Elizabeth Mumbet Freeman (in development for film), Blanket of Stars, and Simon Says. She and Alexis Portillo have teamed up to write Thirty-five Days to Baltimore. Jana is a writer with a purpose, believing that honoring diversity and teaching stewardship for the planet can change the world. She is Writer-In-Residence Emeritus at Herman Melville’s Arrowhead home. Visit her at janalaiz.com.

Alexis Portillo is a Honduran immigrant with a story to tell. Coming from a hopeless and impoverished situation in Honduras, Alex relates to Jana Laiz the story of his harrowing journey through the desert to find his way to Baltimore and a better life for himself and his family. This is his first book. Visit Alex at crowfliespress.com.

The Academy has installed multiple Blueair HealthProtect 7470 air purifiers, and we have limited seating in our auditorium. We closely monitor the situation in Columbia County, as well as recommendations from health authorities, and will adjust our protocols as necessary.

The Spencertown Academy in collaboration with The Chatham Bookstore